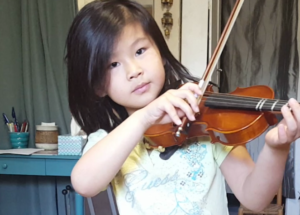 While some students seem to do things perfectly almost the first time, other students tend to be awkward and clumsy. They’re not quite aware of where their feet or their body are; they trip easily and may bump into other people without realizing it. Their movements are quick and impulsive even when carrying their violin, and they often have trouble sensing the amount of force they are using in their bow hand.

Many students with these traits fit the sensory profile known as sensory processing disorder. A child with this disorder has trouble sorting out the many sensations coming from both within and outside their body. The experience can be chaotic and disorganized. Some may struggle quite a lot, while others may experience the issues more mildly.

I began working with Molly when she was five. With rosy cheeks and bright eyes, she was easy to fall in love with.

Molly’s progress was a little slower than usual, but I didn’t think anything of it until little details gradually began to emerge. For example, her mother mentioned that their family meal was not complete until Molly tipped over her drinking glass. She was constantly running into doorframes and dropping things. In violin lessons adjusting her posture was like trying to pin Jell-O to a wall.

Each step took much more work for Molly. As her mom describes it, everything was topsy turvy at the beginning of practice. Her fingers fumbled for the notes, and her bow arm was all elbows. By the end of practice she looked and sounded good, but when she picked up her violin the next day it was as though they were starting from scratch.

Two years later, Molly’s playing is beginning to be fluent and natural. She loves violin and feels proud of her blossoming skill.

The situation doesn’t always turn out so well. Ten years ago I had a student very similar to Molly. While some students get through the Twinkle Variations in just a few months, it took her almost a year. By six months into that process the sparkle in her eyes had turned into a sort of vacant acquiescence.

Although she eventually made it through, many students with learning differences make slow progress and may eventually give up. For the ones who do persevere, the emotional tone of these early years can cast a long shadow.

What made the difference between my early student’s experience and Molly’s was a different pre-Twinkle sequence as well as some additional steps during the first year of playing.

Molly’s pre-Twinkle sequence was multi-faceted and comprehensive. A variety of activities allowed her to master each tiny skill (including cognitive and memory skills) in a simplified context before putting everything together. Here are a few of the ingredients her sequence included:

1. Playing a collection of familiar songs on the piano (with the right hand only). Playing piano requires less coordination on the violin, and helped Molly become familiar with the songs she would later play on violin. She discovered the patterns of steps and skips, built finger independence, and had a chance to settle into a practice routine on an activity that was musical and approachable for her and her mother. 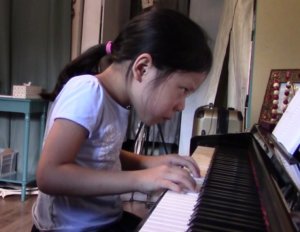 A pre-Twinkle piano sequence allows students to make music from the beginning, while building finger independence and other skills.

3. Working through a sequence of Violin Movement Building Blocks set to these same songs (video here). This step happens during the same time period as her piano playing. Each building block prepares one specific postural movement, creating the muscle memory for each skill used to play violin. Many of these movement building blocks are also midline-crossing activities. Singing the songs offered an accessible multi-tasking challenge and developed Molly’s sense of pitch.

4. Plucking the songs in cello position. Fine motor skills are challenging for young children even when the item they’re manipulating (scissors, crayons, etc.) is directly in front of them. This same skill is much harder when it’s moved to one side of the body, as it is in violin playing.

Starting in cello position, seated on the floor with the violin resting on her lap, helped Molly gain control over her rebellious, distractible fingers with the violin located comfortably in front of her. It also postponed the tricky rotation of the left hand, which makes it hard for children to find their fingers because their pinky and index fingers seem to have switched places.

5. Starting in third position. Most students are not very accurate in sensing the alignment of their wrist and arm. For a student with sensory processing issues, this challenge is exacerbated by their general lack of body awareness. In third position, the body of the violin kept Molly’s wrist perfectly aligned, building muscle memory for a correct wrist angle and freeing us to focus on other skills. 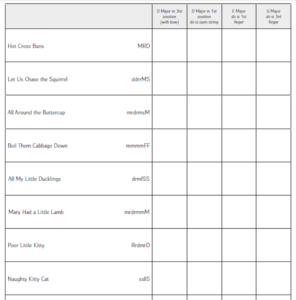 Shorter songs are especially important for sensory-challenged students whose full attention is required for physical tasks.

6. Short songs. Because managing her body took a great deal of Molly’s attention, less attention was available for recalling the notes. For a student like this, Twinkle is an incredibly long song. It requires them to keep track of not only the notes they’re about to play, but also where they are in the overall song structure.

Shorter songs reduce the memory load, freeing children’s attention for other tasks. They’re helpful for all beginners, but they’re especially important for sensory-challenged students whose full attention is required for physical tasks.

7. Many songs at the same skill level. Although sensory-challenged students master playing more slowly, that doesn’t mean they enjoy playing each song for twice as long. As for all children, 4-6 weeks is about the right amount of time before their enjoyment and attention begin to wane.

Molly’s early repertoire included approximately ten short songs. The sense of self-determination she got from choosing which songs to work  on each week helped to offset some of the more difficult aspects of violin practice. Meanwhile, each new gold star on her list of songs showed her that she was making progress, even as she continued mastering bowing and posture fundamentals. 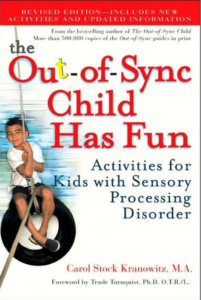 The best resource for sensory integration activities I’ve found is The Out-of-Sync Child Has Fun, by Carol Kranowitz (here).

8. Vestibular awareness activities. For Molly, standing straight and tall was hard even without the violin. When she felt like she was standing straight, her was leaning left and her head was tilted to the right. These quirks were magnified when she played.

After trying many ideas with mixed success, what finally made the difference was fifteen minutes a day of fetching items for her mother while balancing a bag of rice on her head. Feeling the weight on her head helped Molly to use gravity to find her vertical alignment. Gradually her mental body map began to include her vertical position. Her violin stance improved seemingly overnight, and her mother noticed that she didn’t run into things as often.

9. Building literacy skills early. Reading can be a challenge for children with sensory processing issues because they have trouble coordinating various competing streams of information – such as reading music while playing. Since Molly has done Kodaly-based literacy activities from the beginning, she can already sight-sing a line of music while simultaneously playing it on piano. Once her violin playing is fluent enough to add note-reading, her only real challenge will be the multi-tasking itself.

It gives me immeasurable joy to see that Molly’s eyes still have the same sparkle they had when she first arrived in my studio. I am grateful that many years of experimentation resulted in her having a better experience than my student from long ago.

The pre-Twinkle sequence that I used with Molly is actually the sequence I use with all my students. Although it’s been especially important for sensory-challenged students, it has given all my students more velocity and success in their first year of playing.